Sphacteria island - All you need to know

Sphacteria (also known as Sphagia) is a small island in the western part of Navarino bay in Messinia that serves as a natural breakwater because it blocks the bay from the Ionian Sea.

Sphacteria island is one of the largest natural harbors in Greece, located in front of Pylos’ harbor, rendering it one of the safest ports in the Mediterranean.

It is well-known as a historic site where famous battles and war conflicts took place both in classical and modern times due to its strategic location.

It is a long, rocky and narrow island, covering an area of 3.5 square kilometers.

Although it is less known than other islands on Greece’s west coast, Sphacteria is a remarkable island with a steep coastline, intricate rock formations and peacefulness, as it is unpopulated.

When in Messinia and Pylos, it is absolutely a must-visit place that has much to offer not only in terms of activities, but also in terms of its rich historical background. Check out further details about the island below: 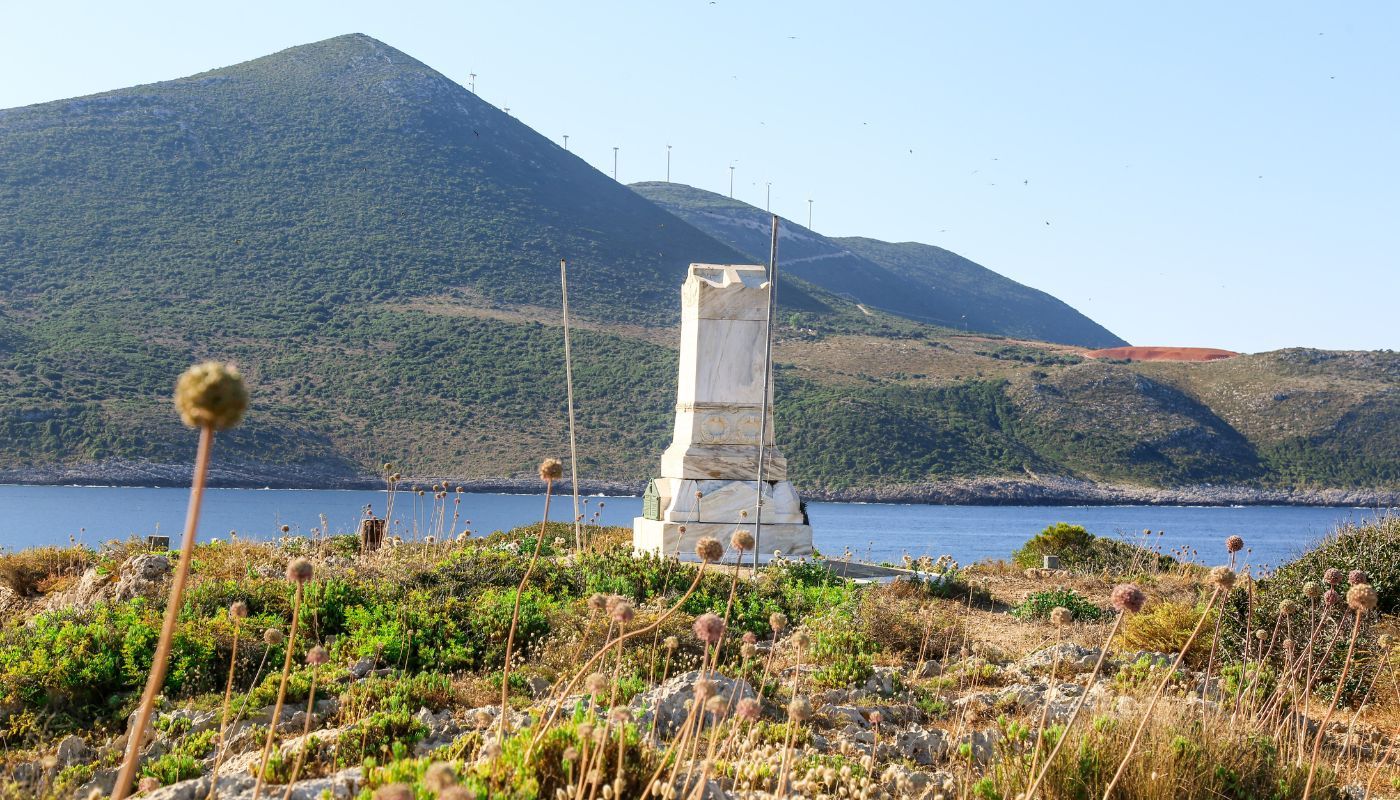 Sphacteria is a famous historic site that has been associated with crucial battles and war conflicts that occurred during the Peloponnesian War and the Greek Revolution of 1821. Apart from its peacefulness, Sphacteria island conceals a bloody, heroic past.

Even during the Homeric times, those under King Nestor’s reign -known as Pylians- constructed a fortress at the north end of the island in order to reinforce and fortify it before taking part in the Trojan War and thus, detering a possible counterattack.

Sphacteria island and the Peloponnesian War

This island was the spot where in 425 BC, during the seventh year of the Peloponnesian War, an important battle took place.

A large part of the Spartan army had occupied Sphacteria and after unsuccessful truce negotiations with the Athenians and their merciless terms, it was Demosthenes’ command that urged the Athenians to attack and besiege the Spartans.

Finally, the Spartans surrendered for the first time in history, were defeated and violently massacred.

This battle and the Athenians’ victory marked a turning point in the Peloponnesian War, as it took Sparta a lot of years to recover.

In memory of this Athenian victory, the sculptor Paionios created the impressive statue of the “Victory of Paionios”, which can now be exhibited in the Archaeological Museum of Olympia.

Sphacteria island and the Greek War of Independence

During the Greek Revolution of 1821, two years before the Navarino Naval Battle, it was in Sphacteria island where the Turkish-Egyptians and the Greeks-Philhellenes fought.

In particular, on 16th April 1825, Ibrahim attacked the Greeks and Philhellenes who were defending the island. It was an uneven battle which gave the chance to Ibrahim to kill most of them.

Consequently, Ibrahim managed to establish his dominance in this region, suppressing the Greek revolution, until 20th October 1827, when Navarino Naval Battle marked his defeat.

How to get to Sphacteria island 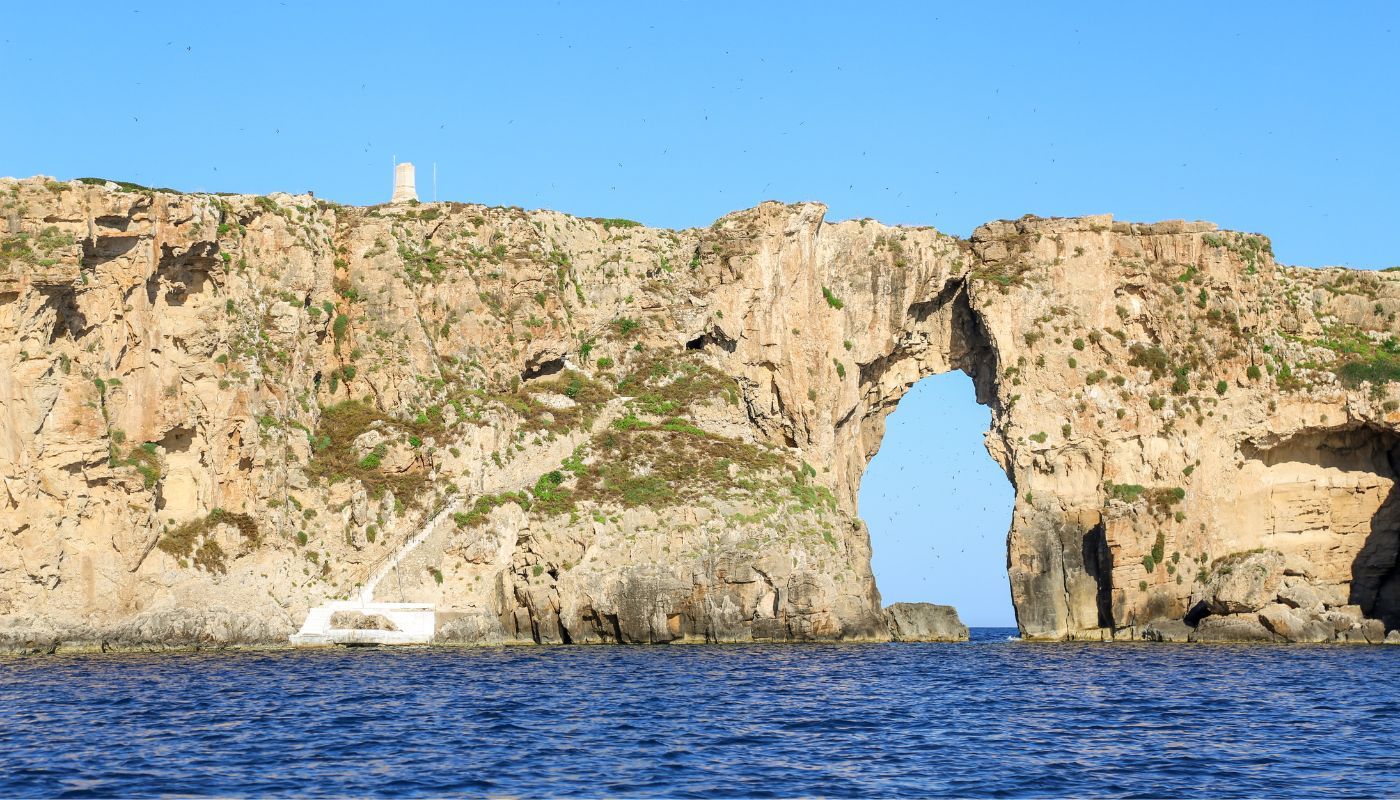 During your stay in Pylos, where you can find a lot of alternatives for accommodation, varying from campsites to luxurious hotels, you shouldn’t miss a chance to visit Sphacteria island.

Its rocky scenery and spectacular view over Navarino bay on one side and the Ionian Sea on the other, will make you feel more than impressed. Moreover, the historic monuments related to the aforementioned historic battles on the island will satisfy your interest in history and culture.

During summer, you can reach the island either by renting a boat or by tourist boats that depart daily from Pylos and Gialova.

What to see on Sphacteria island

While sailing along its coast, you will see the monument of Santore Santarosa, who was a philhellene and a former Italian Military Minister. He tried to defend Greece during the Revolution, but he died while fighting for the Greeks’ Independence.

Paul Marie Bonaparte was Napoleon Bonaparte’s, the famous army commander’s nephew. He had secretly taken part in the Greek Revolution as a commander of the Greek fleet. He died in 1827 and was buried in a mausoleum on the island after the end of war in 1832.

Next to Panagula church, there is the wooden church of St. Nicholas. The Russians built the church in 1897 as a dedication to their people who were victims of the Navarino Naval Battle.

It is a breathtaking beach on the island of Sphacteria and one of the Gialova settlement’s beaches. Sphacteria beach is located in a natural place with very scenic views among steep mountains and cliffs.

You can get into the sea smoothly, so you don’t need any special shoes. It is usually isolated even in peak season’s months, so if you are not a fan of crowded beaches, you can enjoy its tranquility.

Sphacteria beach coast is free for all, but there are no amenities.

1.What activities can I do on Sphacteria island?

Sphacteria island is suitable for various activities like hiking, as there is abundant and rare vegetation on it. Swimming, sunbathing and diving to explore Sphacteria’s underwater beauty are also a good idea.

2. Is Sphacteria beach suitable for families?

Sphacteria beach is suitable for anyone, but you should keep in mind the following important features of the beach. It is a secluded, virgin beach with a smooth entrance to the water. However, there are no amenities, so you should bring any supplies that you need for the whole family with you. Also, it is accessible only by boat, so all members of the family should be aware of that.

At Erodios Camping in Pylos, you can Book a campsite, a caravan or a bungalow to stay with your family and friends and take a boat to reach the exceptional and historically-rich island of Sphacteria!