The Round of the Peloponnese - 7 Top Destinations

In the southern part of Greece lies one of the country’s most beautiful regions, the Peloponnese. It is a vast peninsula which is connected with the rest of the mainland via the Isthmus of Corinth.

It is a year-round destination that attracts many tourists, offering a wide variety of alternative options for an enjoyable tour.

The Peloponnese is surrounded by sea with stunning beaches on all sides. It is filled with remarkable archaeological sites and breathtaking mountain landscapes.

The ideal way to explore the Peoloponnese and its exceptional places is by car, as you can have the chance to admire both sea and rock while driving.

So, a road trip around the Peloponnese is a unique experience with countless worthwhile destinations.

Just keep in mind that the Peloponnese is the third largest region of Greece, which means that in order to have a pleasant and relaxing road trip, you should plan your accommodation in advance to stand the long distances. There is an array of accommodation options, ranging from luxury hotels to comfortable campsites.

Here’s a suggested itinerary for the round of the Peloponnese with the top 7 places you should definitely visit and the most interesting things you can see around. 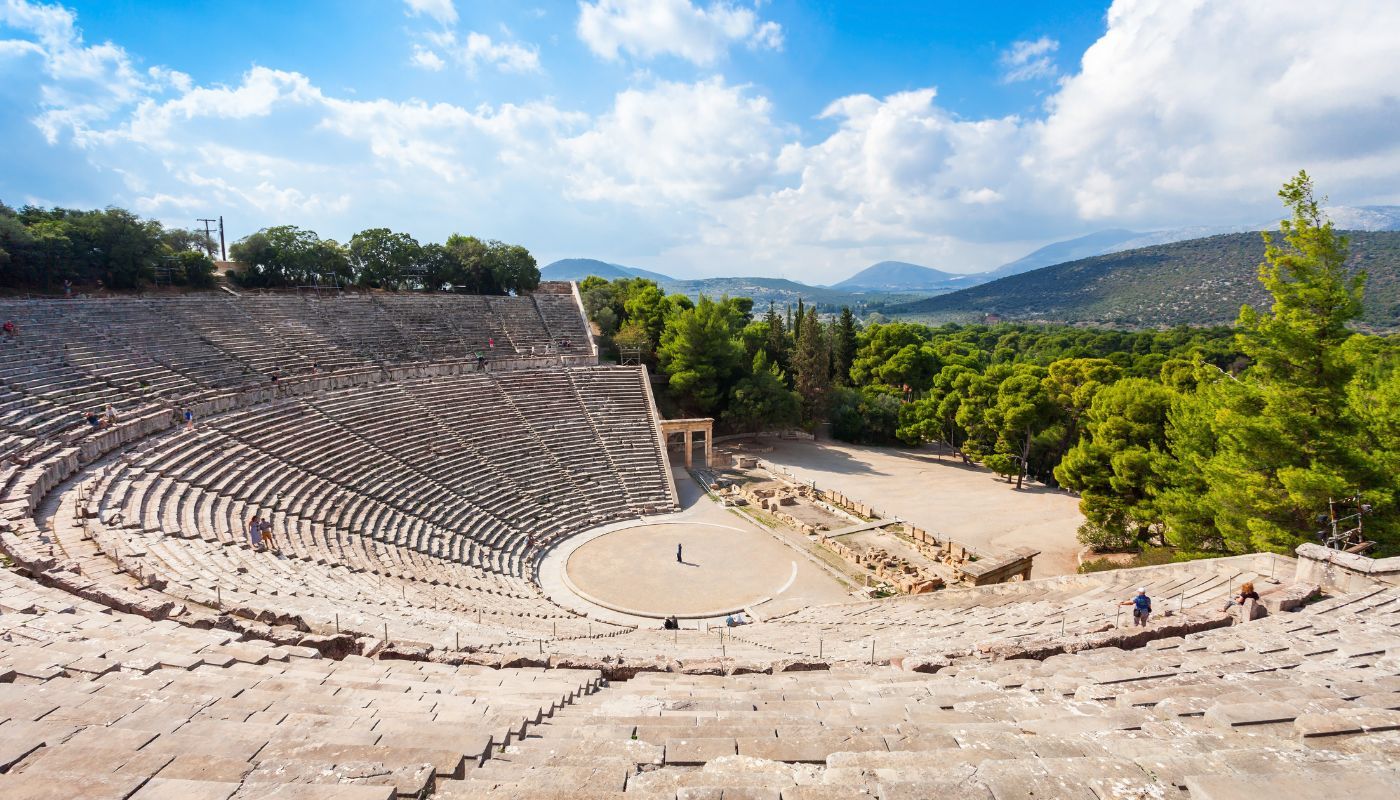 The Ancient Theater of Epidaurus is thought to be the best-preserved ancient Greek theater in relation to its ideal acoustics and harmonious structural proportions. Its construction dates back to the late 4th century BC.

It is the ultimate example of a classical theater consisting of three main parts: the Orchestra, the Scene and the main theater, called Koilon.

Every summer, thousands of people swarm to the Epidaurus Festival in order to watch a theatrical performance, either an ancient drama or a modern play created by Greek or foreign directors.

It can host up to 15,000 spectators and thanks to its brilliant acoustics, each and every actor can be perfectly heard by all of them, even those sitting in the upper seats.

● In Epidaurus, except for the Ancient Theater, you can find the ancient Sanctuary of Asclepius, which was devoted to the god of healing.

Modern medicine is considered to have originated in Epidaurus due to this enormous site with temples and the remains of a hospital that mark the transition from the faith in divine healing to medical science.

● Between the Ancient Theater and the Sanctuary of Asclepius, there is the Archeological Museum of Ancient Epidaurus which displays the most important findings of the long-lasting excavation of the Asclepius’ Sanctuary.

The coastal town of Nafplio is surrounded by a majestic Medieval atmosphere sensed mostly while strolling around its Old Town and narrow streets.

As a historical fortification town, Nafplio was the first capital of Greece after the Greek Revolution of 1821 against the Turks. Therefore, history is prominent all over the town with imposing fortresses and interesting museums.

Nafplio, due to its close proximity to Athens, is nowadays a popular destination for weekend excursions and it is well-known for its romantic and picturesque atmosphere.

There is a variety of restaurants, cafes and shops in the town of Nafplio, bustling nightlife as well as beach resorts that make it ideal for summer holidays, too.

● The fortress of Palamidi: On top of the hill above Nafplio, there is the impressive Venetian Palamidi fortress. It is one of the most famous sights of the town, offering a great view to the Argolic Gulf.

It was used as a place of imprisonment during the War of Greek Independence. There are eight bastions that are surrounded by walls, 19th-century dungeons and the chapel of Saint Andrew. You can reach the castle by taking the 999 steps -in reality they are less than 999- or drive up near it.

● The fortress of Bourtzi: At the port’s entrance, there is a small island with a Venetian fortress that prevented naval attacks. Although Bourtzi is generally not open to the public, during summer season tourists can reach the island by boat and walk around it.

● Tolo is a fishing village that is perfect for relaxing holidays and it has thus become the most popular summer resort over the years. It is close to Nafplio and you can enjoy sandy beaches, hotels and taverns. 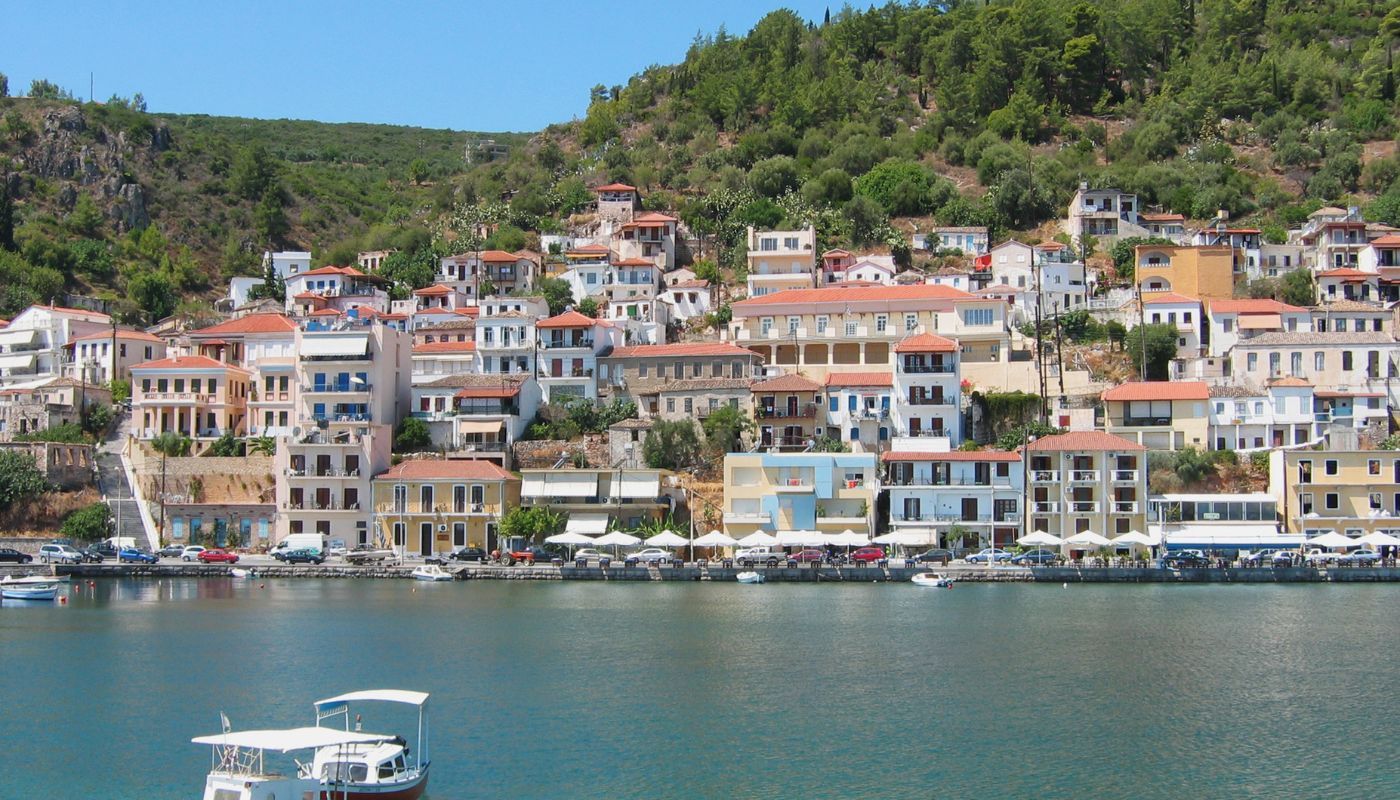 In the western part of the Peloponnese, in the region of Mani there is a scenic harbor, called Gythio. The colorful houses dating back to the 19th century are the ornaments of the harbor, creating a picturesque coastal background.

In the traditional taverns of Gythio you can try amazing seafood and drink some glasses of Greece’s national drink, ouzo.

It is an impressive spectacle and a lot of tourists get there to take some pictures of this rusty, imposing ship which is just a few meters off Selinitsa’s shore and has been abandoned there since 1981.

● Mavrovouni beach: It is the most popular beach of Gythio and the largest one in the whole region of Laconia. It is a sandy beach with crystal clear water. It’s well-known as the natural hatchery of the endangered species of caretta-caretta sea turtles. 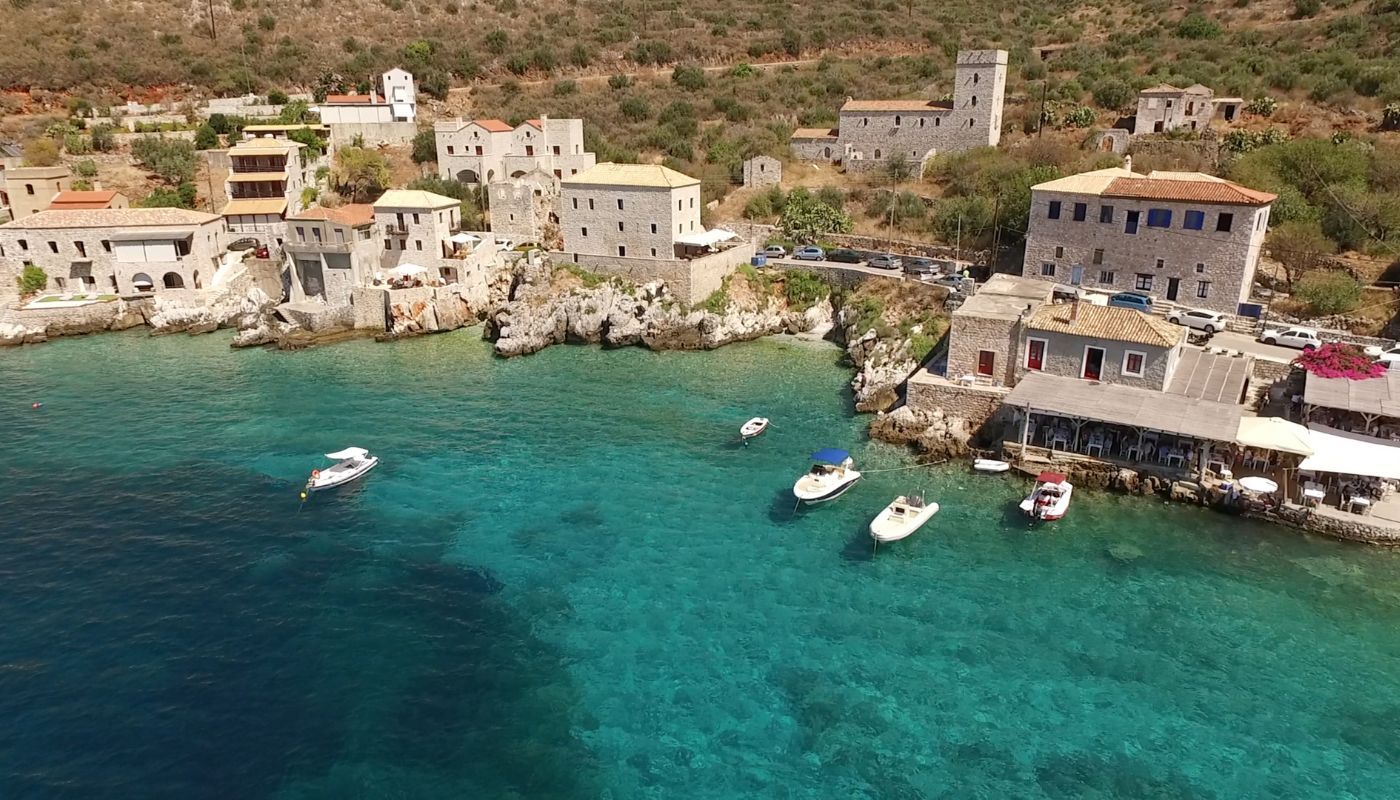 Mani or Mani Peninsula is a region that lies between Messenia and Laconia in the south of the Peloponnese and it is mostly popular for its tower houses, castles and untamed natural beauty.

There are quaint coastal towns and villages with warm-hearted locals ready to welcome you.

● Areopolis is a picturesque town with tower houses made of stone and a central square with a lively atmosphere and narrow stone paths.

It is also a place of historical significance, as the Greek War of Independence was proclaimed by Petrobey Mavromichalis at Areopoli’s “Immortals’ Square” on the 17th March 1821.

● Limeni is a seaside village in Mani. It used to be the port of the tower town of Areopolis. There are several restaurants and cafes at the waterfront of Limeni, from which you can enjoy dreamy sunsets or dive in its exotic, turquoise waters.

● Cape Matapan, also known as Cape Tainaron, is the southernmost point of Greece’s mainland and of the Balkan peninsula, right at the end of Mani Peninsula. You can reach it by hiking through a trail and visit the Tainaron lighthouse, as well as the archeological site of Tainaron. 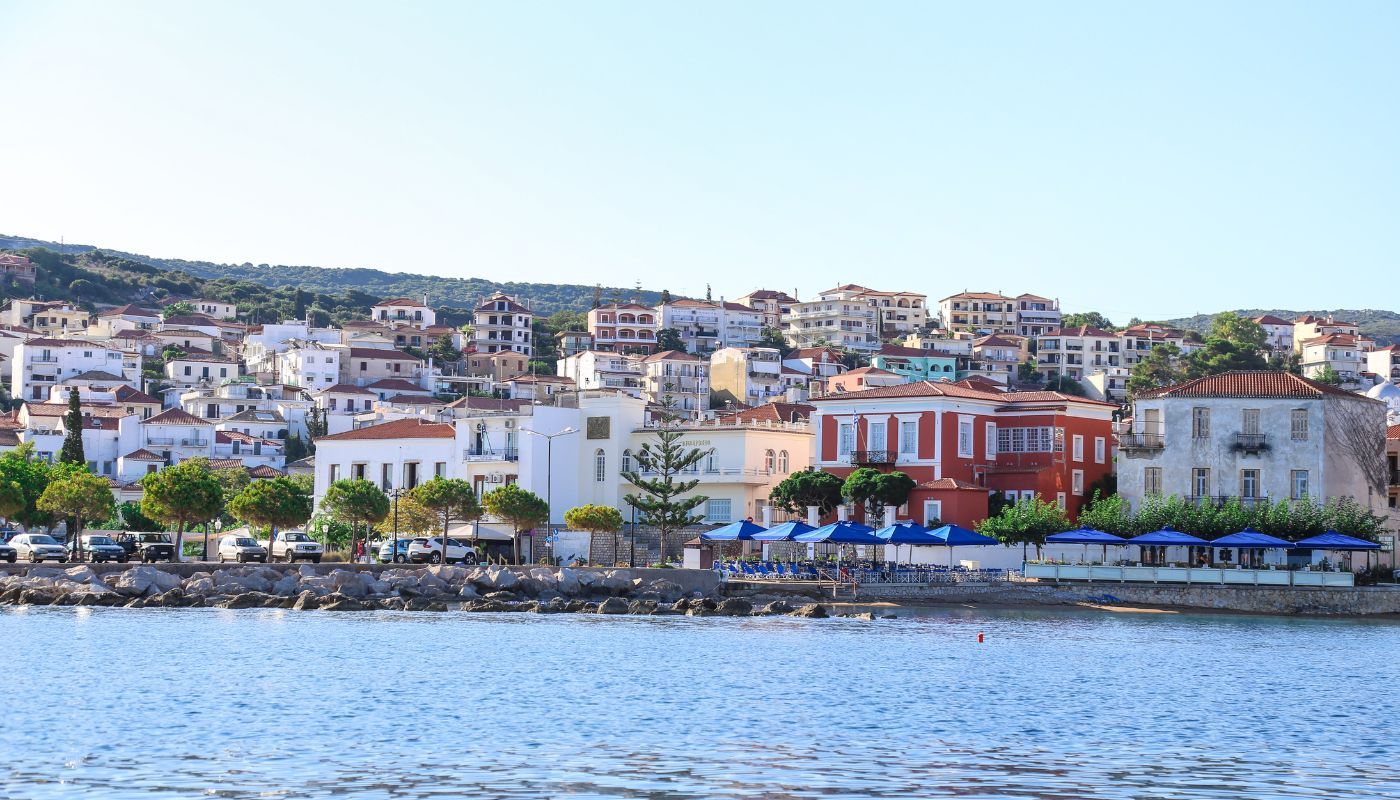 Pylos is a seaside town of great historical significance on the Peloponnese’s southwest coast.

It was built in 1828 and it is associated with the crucial Naval Battle of Navarino (1827), which marked the starting point of the liberation of Greek people from the Turks. Pylos’ natural harbor is one of the largest and safest harbors in the world.

In its coastal road, you can stroll around in the evening and enjoy your meal at a seaside restaurant. There are also plenty of traditional shops, cafes and taverns.

● Voidokoilia Beach: It is the most popular beach in Messinia, located in the northern part of Navarino bay, near Pylos.

It is well-known for its unique semi-circular shape, as it resembles a horseshoe or for others, the Greek letter “omega” in its giant form. Voidokoilia is a unique sandy beach with abundant vegetation and exotic waters.

● Gialova lagoon: Also named Lake Divari, the Gialova lagoon is one of Europe’s most significant hydro-biotopes with rare flora and fauna species. It is situated near a coastal village called Gialova, in the northern part of Pylos. 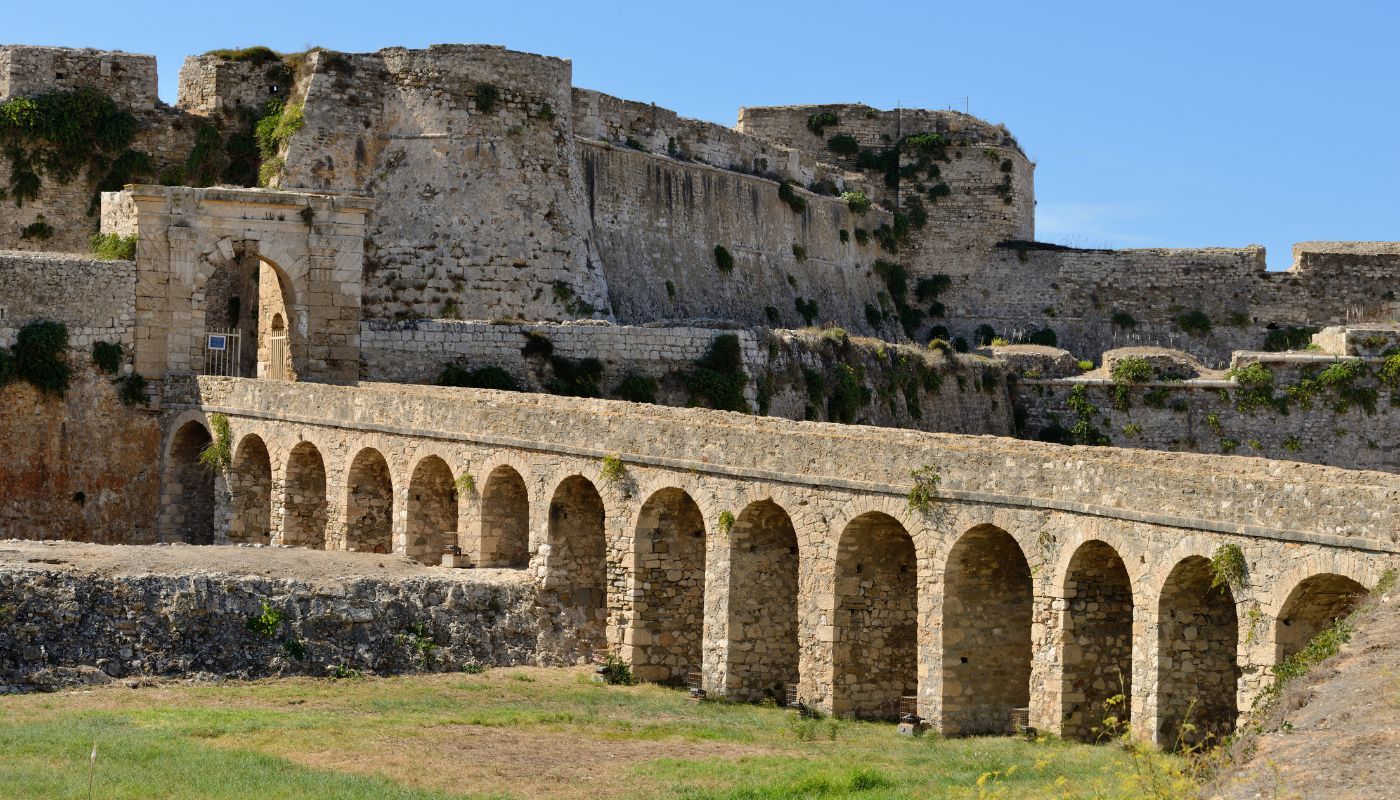 Koroni and Methoni are the castle towns located in the southwest peninsula of the Peloponnese, in the region of Messenia. Their strategic position rendered them significant stops for merchant purposes.

● The Castle of Methoni: It is one of the most famous landmarks in the Peloponnese. Methoni’s 13th-century Venetian castle is situated by the sea, just a few-minutes walk from the lively town of Methoni.

Walking inside the castle and exploring the paved roads and gates made of stone, as well as other significant buildings, such as a church and Turkish baths, is undeniably a memorable experience.

● The Castle of Koroni: It is another famous Venetian fortress with fine architecture, built in the 13th century Koroni’s castle was renovated by the Ottomans in the 16th century.

7. The Citadel of Mycenae 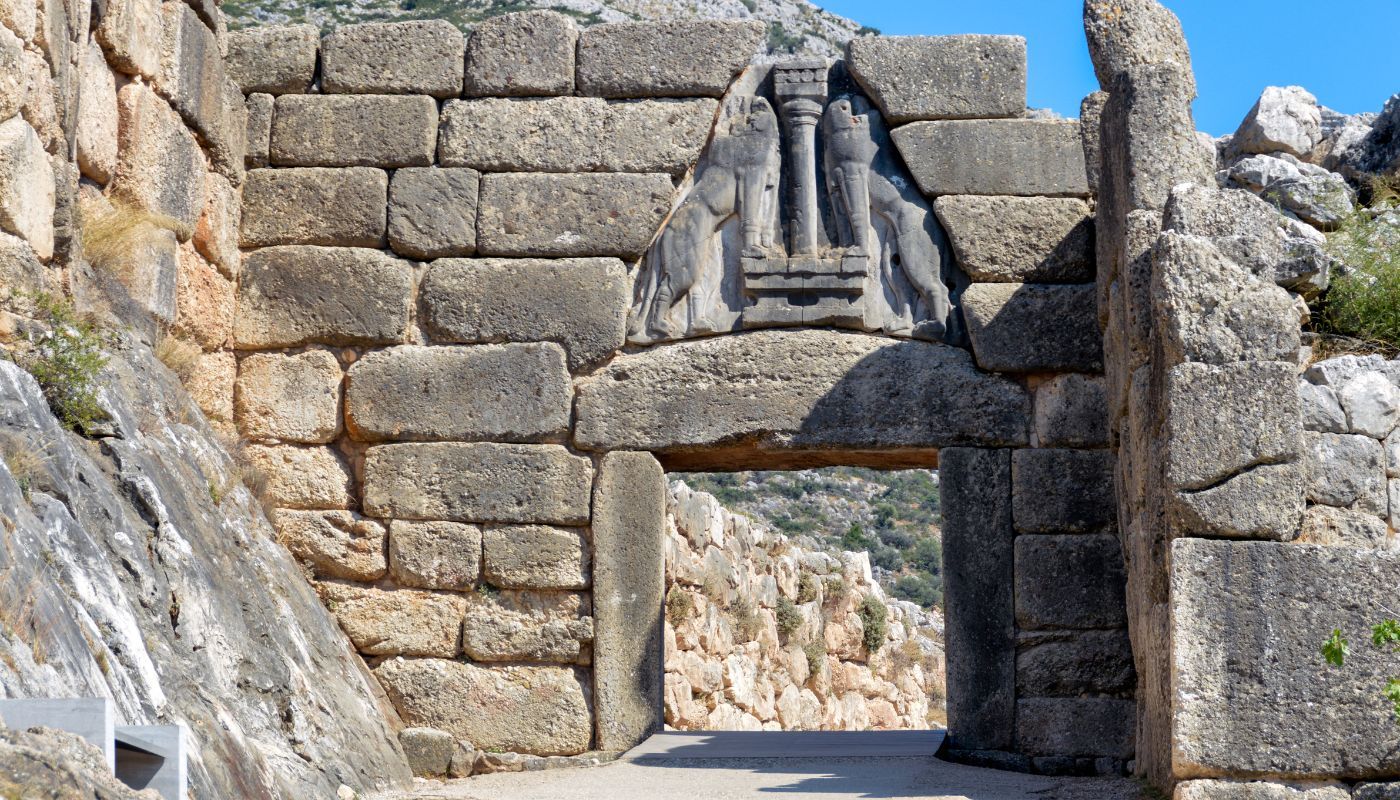 Mycenae is a majestic archaeological site in Argolis, only 24 kilometers away from Nafplio. It is the birthplace of the Mycenaean civilization, one of the earliest civilizations in European history.

Agamemnon was the king of Mycenae and there are references to this citadel even in Homer’s works. Mycenae’s stunning architecture, the royal tombs and gates, in combination with the amazing natural surroundings of the area, make it an astounding experience that is more than worthwhile.

● The Treasury of Atreus: It is also known as the famous Tomb of Agamemnon with a large tholos, dating back to the Bronze Age and was built about 1350-1250 BC.

● The Tomb of Clytemnestra: Clytemnestra, Agamemnon’s wife and the queen of Mycenae, is thought to have been buried in this imposing Mycenaean tholos type tomb. There is a dispute concerning the exact date of its construction (built around 1250 BC).

● The Cyclopean Walls are representative of the “cyclopean masonry” architecture that was applied to Mycenaean fortresses, made of colossal limestone boulders that are fitted together in a rough way.

- What is the best time of the year for the round of the Peloponnese?

The best time for a road trip around the Peloponnese is May or June and September.

During these months, the temperatures are warm enough to dive into its stunning beaches, but not unpleasantly high to prevent you from visiting the main tourist attractions and famous sites.

- How many days should I spend for the round of the Peloponnese?

The Peloponnese is a vast Greek peninsula offering a wide variety of tourist attractions, historical sights and sandy beaches that are worth a visit. Even a whole month wouldn’t suffice to visit all the interesting places of the Peloponnese in detail.

However, it depends on your own preferences and the things you want to visit. A week, for example, would be fine, if you can plan your road trip accordingly and visit as many places as possible.

At Erodios Camping in Pylos, you can Book a campsite, a caravan or a bungalow to stay with your family and friends and organize a road trip around the Peloponnese to marvel at its exceptional diversity!